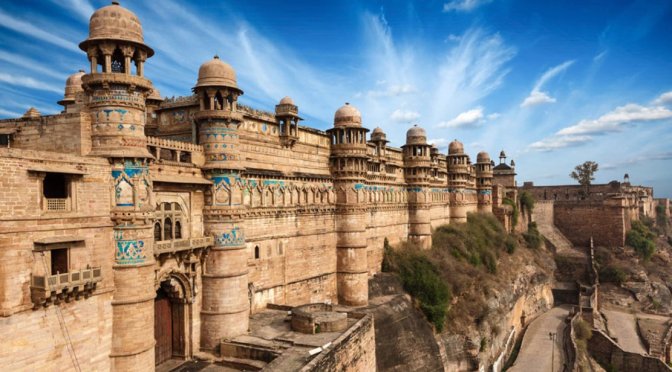 India is a wonderland. The country never fails to mesmerize one. With every turn brewing a story of its own and every person reflecting the pride in his smile, there is no place like India. It is one of the very few countries that boast rich culture and history. It is why it has always been a centre of attraction for travelers. Think about it.

Who would not want to visit a country with several beautiful sights and architectures depicting stories of centuries ago?

Indians take immense pride in the country’s rich heritage. If one wishes to explore and learn about the enticing part of the country, what is a better way than visiting the historical places?

Stay with us because we are here to tell you the top 5 historical places in India.

Listed Below are the Top 5 Historical Places in India

Also known as the epitome of love, the Taj Mahal is the pride of India. The monument is truly a piece of art. It was built by Shah Jahan in the loving memory of his beloved wife Mumtaz. This magnificent beauty took around 22 years to be built completely. You just cannot get enough of its beauty. To your utter surprise, it is believed that Shah Jahan cut off the hands of the workers who built this piece of art. Emperor did this to ensure no one could ever make any monument that would challenge the beauty of the Taj Mahal.

Well, the emperor was not wrong. Even today, there isn’t one monument in the world, as beautiful as the Taj Mahal. Not to forget, the night show of the Taj Mahal adds to its charm and is a great way to end the evening.

Another must-visit site in Agra is Agra Fort. The fort gives away the idea of how rich our country’s history is. Mughals ruled India in the 16th century. Just like the Taj Mahal, the Agra fort is also one of the best things that they left behind. This massive fort is made entirely of red sandstone and is on the bank of Yamuna. The fort reflects the architectural brilliance of medieval times. On entering the premises, you will see well-crafted construction like pearl mosque, Diwan-i-Khas, Diwan-i-aam, Moti Masjid and Jahangir Mahal.

Do not miss the mind-stirring view of the Yamuna river and Taj Mahal from the fort’s pavilion.

India is the land of temples. While exploring the country, you cannot miss visiting The Tanjore temple. The temple was built by Tamil emperor Rajendra Chozha. His reign is famous for its stunning architecture and culture. What is more shocking is that this temple was built in 1010 CE. Can you imagine how creative and talented our ancestors were during those times when they managed to create this art? There is yet another fascinating fact. It is believed that it took almost 30 years to be completely built. On the contrary, scientists predict that it will take around 50 years, including technological aid, to make such magnificent and sturdy architecture today.

To date, it is unknown how people managed to create something like this way back in 1010 CE.

Doesn’t it fill you with pride? Indians have always been known for their intellect and creativity. The great Tanjore temple only makes this fact more concrete.

Ajanta and Ellora caves are perfect examples of craftsmanship. It takes a person to shock that these caves are carved by hands and are full of sculptures & paintings. There is an interesting story behind it. English ruler John Smith was out for a hunt in 1819. He never found the tiger but discovered these majestic Ajanta and Ellora caves. There are a total of 34 caves full of sculptures and paintings. These ancient caves are a blend of 3 religions. 12 caves belong to Buddhism, 17 are for Hindus, and the remaining 5 are Jain caves. As per the people, these caves were a suitable place to study and pray.

Be prepared to be awe-struck on your visit to Ajanta and Ellora caves.

Red Fort is the most iconic site of New Delhi. It is from where a historic speech marking our country’s independence was given by Pt. Jawaharlal Nehru. At that moment this monument gained political significance. Ever since then, every year on Independence Day national flag is hoisted at the Red Fort. Red fort was also built by Shah Jahan who when decided to move his capital from Agra to Delhi constructed it to mark his reign. For about 200 years, the fort was the official seat of the Mughal empire.

Before planning your visit to Red Fort, make sure you do not plan anything else for that day. You will need one entire day to have a complete and thorough tour of this beauty.

These were the top 5 historical places of India. You must visit them at least once in a lifetime. Each monument will make you awe-struck by its magnificence and striking beauty.

Join 532 other subscribers
Follow I Love Travelling and Exploring New Places on WordPress.com