Tiger is the national animal of India, but they also plays a very important role in developing India’s cultural heritage. Around 2,226 wild tigers are there in India and as we have witnessed decrease in the numbers of these endangered species or we can also say that almost tigers has been extinct. Now, in this era you are getting a chance to have a visit at Tiger Safari in India have watch these royal tigers.

As there are so many Tiger Safari in India so you gets confused which one you have to consider for your holiday visit. So, here we are to provide you enough knowledge about different Tiger safari so that you can choose one from them. 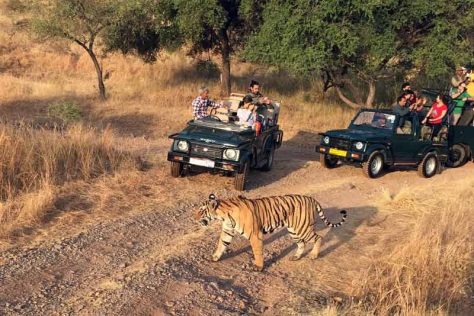 The Jim Corbett Tiger Safari in India was named after one legend who was hunter and later on turned into conservationist. This is not only a Tiger Safari this is a national park which was set up in the year 1936 and was first ever National Park in India. For more attraction it has lots of amazing variety of flora and fauna. You can take safari rides as there are five gates which opens at different timings. The ‘Project Tiger’ was started by this national park in which they have tried to preserve these endangered species. So if you are planning to have a visit at this Tiger reserve then you must not miss the chance and proceed.

Ranthambore national park is the country’s largest national park which covers almost an area of 1,134 sq. km. This is ancient national park which is located in Rajasthan and here you will find many other species also like panthers, tortoise, Indian Python, and many more. It is popularly known for natural and wildlife photography lovers this place will be most amazing and moreover it has three lakes Padam Talao, Raj Talao, and Malik Talao where also you will see the wildlife which will be so interesting to watch.

The most popular tiger safari in India is Bandhavgarh Tiger Safari which is located in Madhya Pradesh and it covers an area of almost 820 sq. km. Here you will also find leopards and variety species of deers and the average cost for the visit will be around Rs. 5500-6500. This National Park is spread over Vindhya Hills and you will find many large and beautiful tigers but remember you visit this park in between the month of February to June as this Park remains closed from July to October and also check the timings before visiting. 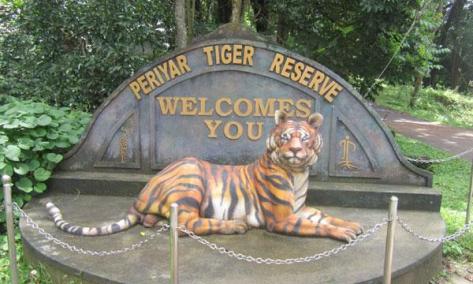 If you are still looking for the best tiger safari in India then you can try this Periyar Tiger Safari which is located in kerala and is spread over 777 sq.km. and there is also an artificial lake since the year 1895 which was created by the Britishers. Here you will also find other wildlife creatures also like wild boar, langur, almost 900+ elephants, and other such creatures including 35-40 tigers. This tiger safari is open throughout the year but still best time to visit this tiger safari is in winters as the weather is pleasant in the month of November to February. This forest is specially known for for its natural beauty so you can have a visit here and take amazing pictures.

If you are planning to go at the southern part then you can have a visit at this Bandipur National Park at Karnataka which covers an area of 874 sq.km. Ya, this park has small variety of tigers but the entry fee for Indians is only Rs. 300 and for foreigners Rs.1500. This Tiger Safari in India is situated between Deccan Plateau and Western Ghats. You can also enjoy at long rivers named Kabini and Moyar, take photographs at this amazing locations and with different type of animals and you will also witness wide variety of flora and fauna. 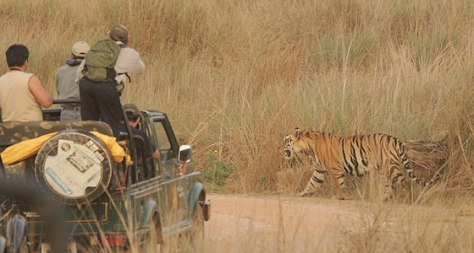 Here is another Tiger Safari for you in Madhya Pradesh and if you are nature and wildlife lovers this place is a blessing which has covered 758 sq.km. and consists of 25 tigers which are generally seen near Pench river. The best time to visit this tiger safari is from February to April as it remains close in July, August, and September. This place is covered with many major places where you can reach either by road or by the railway.

Anamalai Tiger Safari was previously known as Indira Gandhi Wildlife Sanctuary and this tiger safari in India is located in Tirupur district at Tamil Nadu and this Tiger Safari is also has wide variety of flora and fauna which consists of 2000 plant species and these plants has 400 medicinal values. It will be great if you visit this Tiger Safari either in May and June or in October and February.

Above mentioned were the Tiger Safari in India at different places where you can have a visit these holidays and enjoy with your loved ones. Don’t forget to take photographs at amazing locations and also with different animals.

Join 532 other subscribers
Follow I Love Travelling and Exploring New Places on WordPress.com